From Phnom Penh Post: Unimpeded gatherings in the capital over the past two days, following the arrest of 11 activists on Tuesday, have brought the government’s seemingly selective enforcement of a ban on protests into sharp relief. 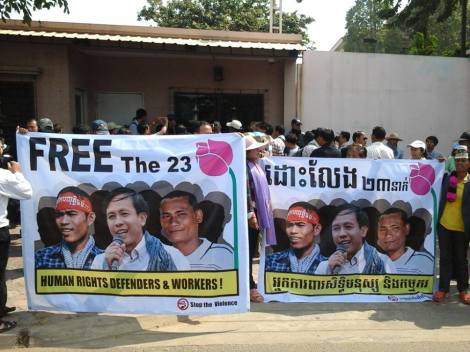 Yesterday, a day after people gathered in the capital for a remembrance ceremony marking the 10th anniversary of the murder of union activist Chea Vichea, dozens of activists marched through Phnom Penh to deliver petitions to seven foreign embassies.

The protesters marched to the German, Swedish, South Korean, Australian, Russian, Thai and Malaysian embassies, where the petitions – calling for the release of 23 activists and workers imprisoned during a government crackdown early this month – were received.

Despite the ban on public gatherings, the security presence at demonstrations over the past two days has been minimal.

Nan Ony, legal officer at the Housing Rights Task Force, who attended both yesterday’s and Tuesday’s marches, said he thought the government had misjudged its ability to silence protesters.

“They released the 11 activists because they saw they could not charge them with any crime. We did not commit any crimes, so [they] couldn’t file any charges. That’s why they didn’t make any arrests today [yesterday],” Ony said.

“Our activists are still detained, so the government showed it doesn’t respect any laws. They treat us like we are an opposition party, but we have no aim for political power. We only work to secure human rights.”

“This group is conducting illegal demonstrations. We keep stopping them, but they never follow our directives,” City Hall spokesman Long Dimanche said. “So we decided to stop [making arrests].”

But Brigadier General Kheng Tito, spokesman for the military police, said yesterday that the baton-wielding Daun Penh district security guards, brought in to quell previous protests, could be enlisted in the coming days if future gatherings “endanger public order”.

“For yesterday and today, the force secured and controlled [the] situation,” he said, refusing to explain why Tuesday’s otherwise peaceful march was any different.

“I think the decision [not to make arrests] depends on talks between the prime minister and the top CPP leadership. But it goes right to the top. The top leaders must give the orders not to crack down or make arrests,” he said. “It’s likely this was caused because of a lot of international press coverage.”

“There’s reason to believe that someone with a great deal of authority – which may include Mr. Hun Sen – is giving orders to enforce the ban,” he wrote in an email yesterday.

The government’s approach to enforcing the ban on gatherings, which its critics maintain has no basis in Cambodian law, has led observers to question whether a mass demonstration called by unions in Freedom Park on Sunday will pass peacefully.

“The government has received a lot of bad press for the excessive use of force during the protests in early January, and for the arrests of so many activists and human rights defenders,” Ramana Sorn of the Cambodian Center for Human Rights (CCHR) said in an email.

“The government has been using this tactic – putting pressure on and off – for some time now. It is being strategic, as they are now in a position where they can decide, on a discretionary basis, to crack down on certain demonstrations and to allow others,” she added.

In a meeting yesterday, Phnom Penh’s deputy municipal governor, Khoun Sreng, denied permission for nine unions and associations to hold a demonstration of 10,000 people at Freedom Park on Sunday, according to Sar Mora, president of the Cambodian Food and Service Workers’ Federation.

The groups on Tuesday sent a letter to City Hall, informing Phnom Penh Governor Pa Socheatvong of their intention to hold the demonstration to demand the release of the 23 people detained on January 2 and 3, a $160 minimum monthly wage for all Cambodian workers and for officials to lift the ban on demonstrations.

“The reason [given] for the denial is the situation [in Cambodia] is not yet stable, and the number of participants is too many,” Mora said after a meeting at City Hall yesterday.

Previous demonstrations held by unionists and the opposition Cambodia National Rescue Party resulted in violence, City Hall’s Dimanche said. In addition, the city does not have the power to raise the minimum wage, nor the jurisdiction to release detainees.

“We urge them to take that up with the municipal court directly,” Dimanche said yesterday.

Their request was forwarded to the Interior Ministry, which should make a final decision on whether the one-day demonstration will be allowed, Mora said. But under Cambodia’s Law on Peaceful Demonstrations, neither City Hall nor the Interior Ministry has the right to forbid a protest unless they provide clear evidence that there is a high risk of violence, said Moeun Tola of the Community Legal Education Center.

With the number of peaceful demonstrations that occurred at Freedom Park from December until early January, the government lacks legitimate evidence to ban a demonstration there, he added.

Whether or not the request is approved, the coalition plans to hold the protest, Mora said.

The group leading yesterday’s march planned to deliver petitions to the embassies of Myanmar, Singapore and India this morning.

Sorn of the CCHR said that “with the ban and these tactics, the government is now in a position where what can be said or not in the streets of Phnom Penh is at its own discretion”. 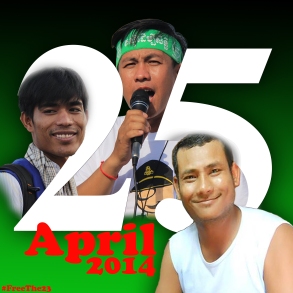 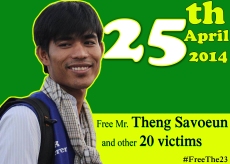 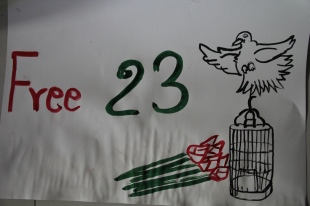 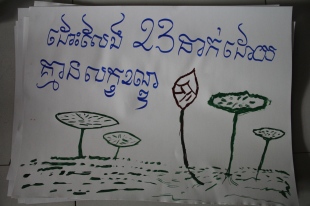 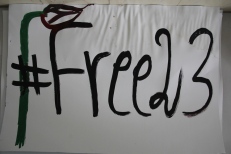 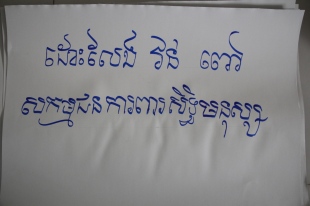 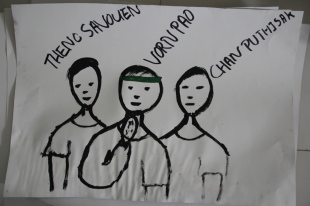 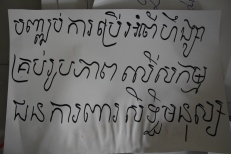 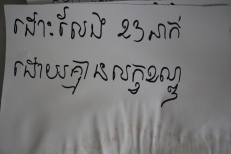 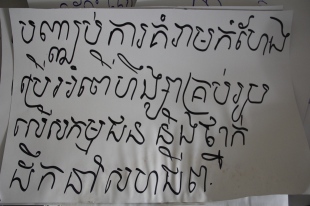 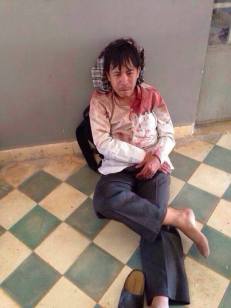 CAMPAIGN FOR FREE THE 23